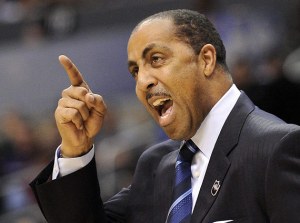 I want YOU to win the Pac-10 Tourney

First of all, the posterizing, straddle the fence dunk by MBA had me on the floor. What a savage jam.

Secondly, if the Huskies even have a modicum of offensive touch in the first ten minutes of that game, it’s a twenty point game right off the bat. Stanford hung around no thanks to themselves. Stanford’s defense was porous at best. The Huskies were solidly in brick city, an offensive fog. What saved them was there tenacious defense. The pressure they put on Stanford was like a leaky faucet, at some point the nagging dripping makes you insane, and Stanford finally lost their collective minds with about ten minutes to go in the second half. Then a playground style dunk-fest ensued, followed by silly bench hi-jinx. Good times for sure.

Thirdly, if the Huskies want to beat Cal, they must be more efficient on offense. Missing point blank layups will not cut it. The Huskies defense is there, Cal cannot touch them in that department. Offensively? Cal is very balanced, inside and outside they can kill you. That said, there is a vast athletic difference between UCLA and Washington. Cal won’t simply be able to spot up and shoot. Overton and Thomas will be all over Randle, Holiday on Christopher, and MBA’s defense has improved leaps and bounds over the past few weeks. I expect a very close game, right down to the wire, with the Dawgs winning of course, I am a homer, what do you expect? 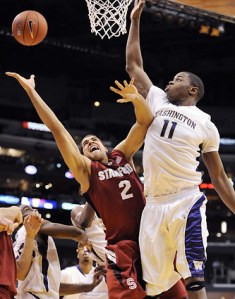 Fourthly, the tourney question. Joe Lunardi, as of right now, has the Huskies in the tourney. What is unknown is whether they make it if they lose to Cal. That answer depends on what other bubble teams do, like Minnesota and Mississippi State. If those teams somehow win their respective conference tournaments, it puts pressure on Washington to win to get that auto-bid. If those other bubble teams lose, I really like the Huskies chances in the event of a loss. Losing to Cal on a neutral court is not a bad loss, and I believe the Huskies have done enough over the past few weeks, i.e. winning on the road, to make it in. It will be close for sure, but I think at the end of the day, despite what the pundits tell us, the tournament committee will put two Pac-10 teams in, with Arizona State on the outside looking in (no tears there…).

Fifthly, the Oregon Ducks football program is an embarrassment to humanity, and I could not be more pleased. Good times.