A night after a brutal home opener loss to Oakland, the Mariners sent Doug Fister to the mound in desperate need of a good outing, not only for the team, but for himself. His last outing at Oakland was not good. (4 innings, 6 hits, 3 walks…). This night though, Fister delivered, and delivered bigtime. 8 strong innings. 4 K’s, no walks. He had pinpoint control, working the counts in his favor, throwing strikes. 100 pitches, 71 strikes. Awesome efficiency. I felt he kept the A’s on their heels all night, not being predictable. This is the type of outing we all hoped for! Ah, but as we know with this version of the Mariners, great pitching is only half the battle. Gotta score runs!

As the game wore on, I grew increasingly frustrated with our hitters, especially with RISP. Rob Johnson looked lost multiple times at the plate, as did Lopez with two men on in the 5th. I think it was the most uninspired at bat of Lopez’s career (ok, total overstatement, but that is how I felt at the time watching it live…). Now, I will say Brett Anderson is a flat out stud. He has wicked good stuff, so chopped liver like Johnson and Wilson will naturally look bad, but Lopez is a decent hitter, and Anderson made him look silly. The thing that really made me mad was just the lack of aggression in Lopez’s at bat. It was infuriating to witness.

The next two innings the Mariners proceed to put men on base. The A’s pitchers repeatedly made mistakes with walks and hit batsmen. But the Mariners could not deliver, no clutch hitting at all. It was a foregone conclusion as I watched this game, I kept telling myself there is no way Jack Wilson can get the ball out of the infield, or Figgins getting caught stealing, it was a trainwreck. Ahh, until the 8th inning… 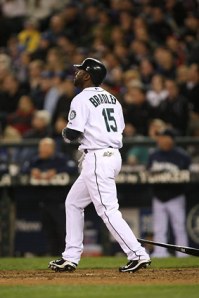 Lopez got his third hit of the night to lead off (ironic that he looked great three of four at bats, but the one in the 5th was just terrible, odd stuff…), then Sweeney worked the count and drew a walk. Up comes Milton Bradley. (I want Milton to succeed. For him, but mostly for the Mariners sake!). Batting left handed, Milton just looks more comfortable at the plate. Boom. 3 run blast to deep right. I went nuts, like we just won the division or something. I guess when run scoring has become such a laborious task for Seattle, seeing a massively clutch home run late in the game made me giddy with excitement. Welcome to Seattle Milton. You start doing things like you did last night and you’ll be loved here. We are simple folk, really.

Hero(s): Doug Fister & Milton Bradley. Not sure if I can pick two, but these guys are the clear cut heroes of the night. The M’s needed Fister to step up, and he did, as well as Bradley. Well done fellas.

Goat: Rob Johnson. 4 LOB, 3 K’s. What else is there to say. He did call a nice game with Fister, but at some point that excuse wears terribly thin, we need hitting from the catcher spot, and Johnson was a complete bust at the plate last night.