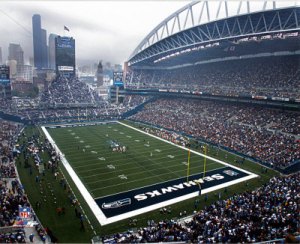 This Sunday the Seahawks host the Rams for the NFC West division title. 6-9 hosting 7-8. Winner gets a home playoff game against either Green Bay, New Orleans, NY Giants or Tampa Bay. All those teams will have 10 or more wins going into the playoffs. I have a random thoughts on all of this.

I think a rule change should be in order, but not right away. I think making a team be at least .500 to host a playoff game is appropriate (Re-seed). I do not like the idea of preventing a team with a sub .500 team from even making the playoffs. The goal each year is win the division, you should be rewarded for that. But be .500 please. If not, you gotta go on the road.

I think all of this hosting a playoff game negative chatter could be moot. Look, Green Bay and New Orleans will beat either Seattle or St. Louis on the road, at home, on the moon, doesn’t matter. So I think all the huffing and puffing is unwarranted. Just a thought.

Draft position is an issue, and probably the biggest debate point. I go back and forth on this one. The difference between winning and losing is 8 draft slots, 13 to 21. That may seem like a lot, and considering the Hawks need a QB, maybe the fans saying lose to get the higher draft position are right. I tend to disagree. Take a look at this link: http://www.cbssports.com/nfl/draft/mock. Both Rang and Reuter have the Hawks taking an OT at 13 (if they miss the playoffs). Even if the Hawks win, look at 21, at RB and OT. I think both of those positions are needed, but OT help is huge. Neither have the Hawks taking a QB. I think fans just assume they’ll take a QB, but will one be there at 13 or 21? Who knows. I think the draft is a craps shoot, I don’t like the idea of losing just for draft position. Win or lose the Hawks have a 1st rounder. They could trade up and get Newton, maybe Mallett, or trade for one in the league already like Kobb or Flynn. Or they could just man up and get good at talent evaluation like the Patriots and find diamonds late in the draft while saving money. Personally I like option three (the Patriots are the best organization in football.). Heard this today: Aaron Curry? 4th overall pick with a huge contract on a bad defense, little to no impact. Legarrette Blount? Undrafted rookie 1,000 yard back. Who would you rather have, considering the value? I’d take Blount in a second, even if he is a Duck. Again, the draft is about talent evaluation, not draft position.

Another angle to all of this is the Rams. They, in my opinion, are the best young team in the division. Why? Sam Bradford. He’ll be an all pro very soon. He has all the tools. Now, if the Rams come into Qwest and win, imagine the confidence boost that franchise gets. They were the worst team in the NFL last season, now a division winner, with two wins over Seattle? As a Hawks fan I don’t like the idea of that franchise getting on a roll.

I just want to win a game. A win would then allow the Hawks to host a playoff game. Isn’t that what we all wanted in August? I fully understand and agree this team is frustrating to follow and all things being equal don’t deserve to make the playoffs. Where is the team that beat Chicago on the road in what was, in my view, the best game the Hawks have played in four years? They are in there somewhere. Odd things have happened at Qwest in the playoffs (Tony Romo anyone?), so I think a win and a playoff game would be exciting and interesting for so many reasons.

Finally, here is the bottom line: If Charlie Whitehurst starts, the Hawks will lose. He is the worst QB in the NFL. He’s terrible. He can’t read defenses, he can’t hit an open receiver, he can’t look off defenders, he’s just bad. In order for Seattle to win, Hass must play, even with a bum hip. No Hass, no chance to win, it’s pretty simple. This is most likely Matt’s last stand, so I’d love to see him go out fighting. He deserves it, no one works harder and cares more about the Seahawks than Matt Hasselbeck. Here’s hoping he’ll get a shot in the playoffs.

4 responses to “Seahawks v Rams for the NFC West title”