Checking on the Young ‘uns – Tacoma

Over the next couple of days I’m going to run through the Mariners minor league teams and give an update on some prospects to look at.  At the start of the baseball year, I wrote a post about some prospects to keep an eye on, I’ll go through those guys and maybe add in a few.  Leave any questions you have about some guys in the comments and I’ll get to them.

Young ‘uns sounds like onions.  I guess a good share of the time young ‘uns smell bad.  That’s like onions.  Young ‘uns have layers, so do onions.  The people I’m talking about in this post play a game with a ball and an onion has roughly the same shape as a baseball.  How’s that for an intro!

Today, we head down the I-5 South to our friends in Tacoma.  Unless you live in Maple Valley or Yakima like a good share of the writers and readers of this blog do.  If that’s the case don’t take I-5 South because it won’t get you to where you want to be.  You’ll get lost. I’ve really gotten a long ways in this posts two paragraphs. 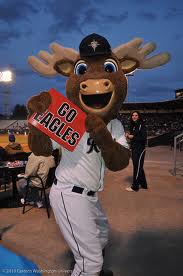 The mascot doesn’t even want to cheer for the Rainiers. In their defense, eagles are really cool.

Anyway, the Tacoma Rainiers (Mariners’ AAA affiliate) have gotten off to a rough start this season.  This is because, to be honest, they aren’t very good.  They probably aren’t the best team in the Mariners minor league system even though they are at the highest level.  The Rainiers are 11-22 (this doesn’t include tonight’s game or stats).  Their pitching has been atrocious, which isn’t that strange for the PCL (the league they play in, and the hitting hasn’t been at the level I thought it’d be.

Since the beginning of the season a few things have happened that have been significant to the team.  Carlos Peguero, who started the season on fire, injured himself (not from being on fire) and was out most of the last month.  To take his spot, the Mariners promoted AA Jackson outfielder Chih-Hsien Chiang to Tacoma.  So, Chiang has been playing there for about a month.  Andrew Carraway, who’s a starting pitcher, was just promoted to Tacoma today after tearing up the AA Southern League (more on him in a minute).  Erasmo Ramirez was sent down from Seattle to become a starter and relievers Shawn Kelley and Charlie Furbush have gone up to Seattle.  Maurico Robles was sent down to AA.  Stephen Pryor, reliever extraordinaire, has been sent up to Tacoma because he’s awesome.  Also, catcher Adam Moore was injured and will be hurt for the rest of his life (I hope not, but it seems this way).  Those are probably the most important transactions that have gone on with the Rainiers this year.  If I’m missing anything, hopefully someone will add it.

Here are the players I told you to keep an eye on and what they’ve been doing (I’ll just go position-by-position):

Jiminez is 30.  I hesitated in including him because this guy isn’t a prospect and probably won’t ever play a role in Seattle.  I did include him because he’s been the Rainiers best hitter, excluding the guy who’s only played 6 games.  Jiminez has been thrown in to left field once or twice which is interesting.  If he is adequate there (which I doubt he is), he might play a few games in Seattle’s revolving left field door.  Otherwise don’t expect to ever hear about this guy in Seattle.  He seems like a good guy though.

Triunfel has quietly put together a solid showing in the last year of minor league ball.  The former top prospect still doesn’t hold the appeal he once had but is hitting for power right now.  There are still plenty of questions about his defense and his high K rate but he’s hitting the ball hard, especially in the last couple of weeks.  If he keeps it up, it’s hard not to wonder if his bat is more valuable than Ryan’s glove.  Admittedly, we’re still a few months away from having to seriously ponder those questions but it’s fun to think about while Triunfel is doing well.

From a mild, pleasant surprise to an extreme disappointment.  After hitting everything he saw in spring training, Vinnie the Cat hasn’t done much of anything in Tacoma.  He had a good week 2 weeks ago but otherwise has been very quiet.  Catricala has been the best hitter in the system for the last couple of years and there’s not a lot of reason to believe that he won’t start hitting but until he does, remain nervous.  The Mariners could really use him to be good.

Chiang’s batting average is decent but 26 of his 31 hits have gone for singles.  That’s not fun.  He isn’t walking very much.  Before coming in the Erik Bedard trade last year he was killing the ball and hitting for a good amount of power.  Where did that go, Chih-Hsien?  It’d be cool if it came back.

This is much more interesting than Chiang.  Some of it is interesting in a good way, some not.  The extra base power is great.  Unlike Chiang, Trayvon has 13 extra base hits in his 35 hits.  Not to mention, he’s a better athlete and fielder.  But, look at those strikeouts.  34 strikouts in 133 at-bats isn’t good and his contact rate is something he’s always struggled with.  He may be the best outfield prospect in the system (not saying much) but until he cuts down on the K’s he probably won’t cut it in the majors.

Carlos Peguero has a 1.847 OPS which is awesome but he’s only had 15 at-bats so I don’t think I’ll include him.  He does have 4 extra base hits in those at-bats so that’s almost as many as Chiang has had in 114 at-bats.  Yikes.

Not so good.  At the start of the year, I thought Forrest Snow could add to the depth the Mariners have in their 4th/5th starter types but this start hasn’t brought much confidence.  The PCL isn’t an easy place to pitch and he might be having some bad luck.  He still has an 8.6 K/9 innings rate but his walks are way up.  His K/BB rate right now is at 1.48 and historically it’s been right around 3 K/BB.  We can hope that comes down and I think it will.  He’s getting hit hard though and did last year in Tacoma too.  He was drafted in the 36th round and maybe this just isn’t going to work out.  But, he’s got an awesome name and went to U-Dub.

Oh dear.  I thought Chance Ruffin was going to make the Mariners out of spring training.  Now he’s just laughing at me.  His strikeouts are way down, his walks are way up and giving up a run per inning isn’t a good thing.  I haven’t read anything about something being wrong with him or his velocity being down but maybe something will come up soon.  He seemed like a pretty sure thing when he came over from Detroit and would be a good relief pitcher for the team in the future.  Right now, that seems to be up in the air.

As you can see, Carraway had success in Jackson.  In fact, he may have been the most successful player in that rotation which is really saying something.  Now, he moves up to a league that hits a lot better.  Andrew throws a ton of strikes and doesn’t have a huge strikout rate.  Will he be Anthony Vasquez, Blake Beavan or Doug Fister?  From what I’ve read, he’ll be one of those outcomes as a pitch-to-contact type of guy.

Pryor started in Jackson and then was promoted due to awesomeness.  His fastball is high 90’s with a good slider and seems to strike out everyone.  His K/9 rate is at 13.8 and his K/BB is 5.20 right now.  Going forward we’ll have to keep watching his walk totals but as for now they’re great.  If he keeps this up in Tacoma we could see him in Seattle by the all-star break.  His stuff is off the charts right now.

That’s about it for Tacoma.  They don’t have a lot of prospects that I’m truly interested in.  I’ll get to the Jackson team soon, and then I’ll write about the entire team or so it seems.

Filed under Mariners, Working On the Farm

2 responses to “Checking on the Young ‘uns – Tacoma”