A Few Thoughts on a Perfect Husky Win 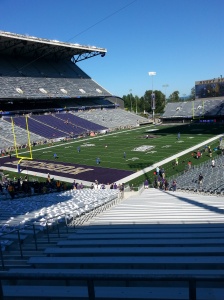 The Huskies christened the new Husky Stadium on Saturday with their best win in years.  They’ve had wins against better teams, like the upsets of USC and Stanford, but it’s been a long time since they dominated a good team so thoroughly.  I’m not sure how good Boise State will be this year, but they looked like a solid team and were still outclassed in every way by the Huskies.  I’m not going to give a full recap, but here are a few thoughts:

There was nothing to dislike about this game.  The Huskies gave up yards, but they didn’t give up a play of more than 18 yards or a touchdown.  I wasn’t excited about the Husky pass rush while I was at the game, but it looks better rewatching it on TV.  Mostly, the Huskies looked like a team taking the next step.  They executed crisply, didn’t make mistakes, and didn’t let up at any point.  They were athletic and skilled.  This is what we’ve been waiting to see, and if the Dawgs keep playing like this, they’re going to win a lot of games.

One response to “A Few Thoughts on a Perfect Husky Win”