This is it, fellas.  The last of the non-conference games basically wrap up this weekend and then things get serious in a hurry!  Let’s soak in these light-hearted times before we can’t anymore.

This week, things seem to be pretty easy for the Pac-12.  There aren’t many games on the slate (just take a look at my fantasy team) and they all seem winnable.  But, have you really looked deeply into the match ups?  Have you looked past the records and the statistics, at something deeper?  Have you ignored the play on the field and looked at the two fully grown human dressed in a full-body costume on the sideline?  That, my friends, is where the true battle is; the battle of the mascots.

Here’s who would win this week’s match-ups if was strictly a fight between the two mascots. All games are on Saturday and listed as Pacific Time.

In high school, I was a part of a pretty good student section who made their presence known in games.  We would travel about 2 hours from Yakima to Ephrata at least once a year.  It’s a boring, ugly drive.  Sometimes the weather would be ugly in winter months (basketball season).  We would always eventually make it to Ephrata, one time with 13 people in my car (sorry mom).  We’d take our space on the visiting side and wait for the game to begin.  We were big fans of arriving early so we would wait a long time and then the girls basketball game would begin.  Needless to say, we waited some more.  But Ephrata always had someone who would dress up in a body-size tiger costume.  He’d enter the gymnasium and our section would rise.  We would chant, “Tony! Tony! Tony!”  The mascot and Ephrata’s fans would look around, confused.  Our chant would continue until the mascot would acknowledge us.  This small interaction would usually make that stupid drive well worth it.

Tony the Tiger, while awesome, has really lessened the intimidation of tigers.  As much as Life of Pi tried to remind us that these animals are fierce and terrifying, Frosted Flakes’ spokesman hasn’t done the tiger a lot of good.  Why all this talk about tigers when the mascot is a bengal?  Because Wikipedia tells us that a Bengal is just a subspecies of a tiger and there is no real difference between the two.  So, could a Bengal kill a Husky?  Without a doubt, no matter what Tony has done to the Tiger name.  The Bengal earns his stripes, destroys the Husky.

As we learned in week one, the Aggie nickname is short for Agricultarilists.  If you can’t figure out that an agriculturalist doesn’t stand a chance fighting a Trojan warrior, then I don’t know what to tell you.  Aggies get sidetracked trying to find some nice dirt, stabbed and killed by the Trojans.

Experts say that the Sun Devils face a tough early season schedule.  Those people obviously didn’t see that they are 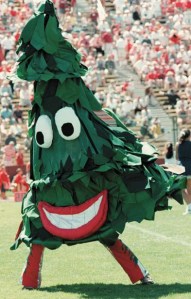 playing the Badgers and a color/tree in back-to-back weeks.  I guess the Devil attacks weak things?  Not that a tree is actually weak.  It’s just that it can not do anything else aside from providing shade and fruit.  A tree is very accommodating to its opposition.  God might appreciate this, the Devil probably could care less.  The Sun Devil burns down a tree and the fire is the color Cardinal.

The Aztec nickname is a good one in my book.  The Aztecs were an ethnic group in Central Mexico from the 14th to 16th century.  San Diego has a strong Mexican population so you have the regional connection as well as a tough group of people.  Beavers are cool animals.  This match-up involves two mascots that are known for building things.  That is neat.  Unfortunately for our furry friends, the Aztecs could probably kill an animal that isn’t known for its ferocity.  Aztecs defeat the Beavers then reshape their dam to make an impressive piece of architecture.

These are two mascots that we’ve run across fairly regularly, so let me get straight to the difficulty that I have with this pick.  The Cougar is admittedly a tough animal.  I sure wouldn’t want to run across one in the wild.  But, it’s not the kind of animal that means certain death in my mind.  It’s much tougher than the Beaver or Wildcat, but not quite as tough as a tiger or as enormous as a bear.  The Utes are clearly tougher than me.  They were more used to being out in the wild and hunting.  I’m really in a pickle!  Frankly, I’m just tired of all the humans winning this week.  Cougars barely edge out the Utes.

Oh, great.  More Aggies.  Do people really think that Agriculturalists are that cool?  I don’t care if your school was named after its agricultural beginnings, New Mexico State.  Bruins maul Aggies any time that the two face off.

Man, another tough decision that involves Cougars!  Let’s hope that sentence is only ever used when addressing mascots and not addressing middle-aged women.  The Vandal nickname is regionally relevant because Idaho is so boring that the only thing to do is vandalize stuff.  Burn!  But, wait!  Idaho isn’t named for the traditional vandal.  From the Idaho website:

So, basically their basketball team was really good at defense 96 years ago and a nickname caught on.  This is kind of cool and a bit strange at the same time.  But, that’s how mascots come to be.  Also from the University of Idaho website:

A member of a Germanic people who lived in the area south of the Baltic Sea between the Vistula and the Oder rivers, overran Gaul, Spain, and northern Africa in the fourth and fifth centuries a.d., and in455 sacked Rome.

So, people question the Idaho nickname and then are told about the first story.  It’s an interesting story and one with some real history about the team.  But, every now and then that person who questions it doesn’t fully buy in so the U of I has to throw up this ridiculous extra bit on their website (this adaptation is listed as the second definition of Vandal in the dictionary).  This has nothing to do with their school and their nickname.  They just wanted another adaptation that wasn’t what you traditionally think about when you hear the word ‘vandal’.  You lost me, Idaho.  You almost had me but then you screwed it up.  Cougars maul whatever definition Idaho comes up with for a Vandal.