I’m not here to write about the Super Bowl.  The Super Bowl was perfect, an absolute dream that will replay in my mind until I’m old and gray, sitting in a recliner telling my grandkids about it.  Words won’t do it justice and other people can recap the game more capably than I can.

The truth is, this season was perfect and there’s nothing I would change.  The 3 losses the Hawks suffered made the team more interesting.  The controversy made the unity between the fans and the team unbreakable.  If you weren’t in Seattle for the last month, I truly wish you could have been here.

My initial task for this post was to try to sum up everything I’ve felt about this team and, more importantly, this town in the last month.  After staring at my screen for the last few minutes, I don’t think I’ll be able to. 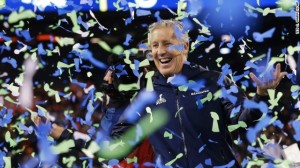 What I can write is how proud I am to live here.  You can’t drive a block without seeing a ’12’ flag.  You can’t turn on any Seattle radio station without hearing about the Seahawks in one segment.  Our hellos have been replaced with “Go Hawks!”  So have our goodbyes, for that matter.  While I’ve never lived to see one of my hometown teams win a championship until yesterday, I have seen some really good teams.  2001 the town was brought together through the Mariners, but not like this.  2005 brought us the Seahawks and while the crowds were always great, they weren’t like this. Last year started this madness but never quite reached the fever pitch we saw the last month.  All of those great seasons (and a few others) were just warm-ups to this year.

Some people think that it’s dumb to put so much into sports and think it’s ridiculous that sports can bring a city together.  They’re right, it’s a bit ridiculous.  But, I wish those people could have seen what I saw in the last month.  I wish they could have seen it with an open mind because I think they would change their mind.

After the game last night, I sat on the couch with my wife, texting the other Good Guys, and watching the news, with live shots of downtown.  People were celebrating in the streets in several different places.  I flipped over to Sportscenter several times and watched that.  The feeling of my city finally winning a championship hadn’t set in yet (it still hasn’t) but I was so content then.  And while contentment wasn’t a feeling that wasn’t created to last, it was the perfect feeling for that moment.  I listened well into the night as KJR had a radio show going until 5 AM.  The range of people calling in was incredible but that shouldn’t be surprising.  This team is made up of some players who were expected to be great and players who weren’t given a thought by most teams.  The team was Bellevue and Rainier Beach.  It was Renton and Kirkland.  The team embodied the Pacific Northwest sports attitude of ‘It’s us against the world’ and so did the fans.  Now, everyone’s watching us as we celebrate.  All eyes will be on Seattle as several hundred thousand people gather on Wednesday to line the streets of downtown and cheer on this team one more time.

I wish I could tell you the feeling here.  I’d waited all my life to feel it and now have no idea what words to use to describe it.  I just know this city deserves this.  There were people camped out in the airport today waiting to cheer on the team as they came home today.  The team wasn’t even coming in through the airport.  There were people lining the streets from Renton to Sea-Tac as they left.

Last night on Sportscenter, Steve Young said, “The 12th man isn’t a gimmick.  They feel accountable for what happens to this team.”  He’s right.  We do and we’re proud to feel responsible for the Lombardi Trophy being in Seattle.

As I was walking in from work today, I stopped to get the mail.  I looked to my right and there were kids out in the 30 degree weather playing football.  I continued the 100 yards or so to my house and walked past 2 cars with someone inside listening to KJR as the hosts celebrated.  I got a little emotional and I’m not sure why this got to me after all the joy that I’ve felt in the past 24 hours.

I don’t know how to describe what this city is feeling right now, but I know it’s perfect.