The Mariners of the Future: Third Base

I’ll dispense with the lengthy preamble for this one.  Like every other position for the Mariners, third base has good options, questions, and lots of guys with something to prove.  Not sure when I’ll get to the outfielders or how I’m going to tackle that many guys, so you might have to wait a bit for that.  Plus, I’m heading on a long vacation in a couple of days.  Sorry.  Maybe the Mariners will make a trade and clear things up for me in the meantime.

Think of Kyle Seager‘s pro career up to this point as a reverse on the football field.  Unexpected, exciting.  Everyone’s paying attention now, where a few seconds ago the game was a bit on the boring side.  He’s just turned past the line of scrimmage, so that danger of being caught in the backfield for a big loss is avoided, but now he has to make that defensive end who held his gap miss, or else it was just a pretty three yard run.  Seager was a bit unexpected as a third round pick in 2009.  He was the second baseman on Ackley’s UNC team, and most thought that Ackley would move to the outfield in the pros and Seager would stay at second.  Instead, Ackley moved to second, and eventually, Seager to third.

Seager’s hit more than anyone expected.  Early on, he was termed Ackley-lite, but that doesn’t seem so accurate now.  He has surprising power without quite having the eye that Ackley was supposed to have.  He started 2012 on a tear, and despite tapering off some, he’s still been one of probably the three best position players for the Mariners this year.  Right now, he’s an average or slightly wose hitter and a good defender who should only improve.  The player he is now is valuable.  The Mariners could do and have done much worse at third base (see below).  The question now is whether Seager can make that defensive end miss and go for a big gain.  To be a star, he needs to make adjustments and become a constant power threat.  He’s not likely to ever be a huge power hitter, but home runs in the 20s with 40 doubles and a .340 OBP is realistic and would make him one of the best third basemen in the league. END_OF_DOCUMENT_TOKEN_TO_BE_REPLACED

The Mariners of the Future: First Base

It’s too much to say the position begins and ends with Justin Smoak, but he is still the primary hope for 1B production.  We could write posts for days about Smoak.  I’m a big supporter, or have been in the past, but time is clearly running out.  There are plenty of big time prospects that take a long time to find themselves in the majors, so there’s still hope.  The question is how long the Mariners can wait for him to become that player.  Given the current state of the team and the lack of better options, they can keep waiting for a while, but Smoak needs to show some consistency before this season ends. END_OF_DOCUMENT_TOKEN_TO_BE_REPLACED

Tooting the horn and a few other things

As Matthew said earlier today, there’s a ton going on in Seattle sports right now.  So, I’ll start with the news of the hour and hit on a few other things.

There’s a lot more happening around but we’ll save it for another day.  I’m going to try to get a few things up on the M’s before Friday, hopefully that happens.  Stay tuned and thanks for reading!

So, the Mariners have played a few games.  Weird, huh?  Jeff Sullivan likened last week’s 2 regular season games in Japan to a dream and that sounds about right.  Now, we’ve been back to Cactus League games for the past few days and I find myself longing for Opening Day.  Then, I stop and think, “That already happened.”  I hope someone else has felt this way or else I spent far too much time writing this meaningless introduction. 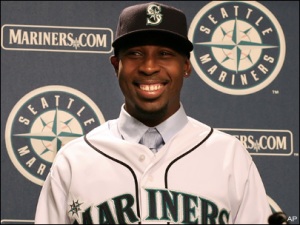 One of the dumb things that happened in Japan was Mike Carp hurting his shoulder and getting put on the disabled list.  The other dumb thing was getting 3-hit by Bartolo Colon but I’ve tried to conveniently not remember that part of the dream.  Mike Carp got put on the disabled list before the 2nd game of the season and Carlos Peguero was activated for the 2nd game in Japan.  Now, Carp’s DL clock has been ticking even though we aren’t technically in the regular season at the moment so we can expect him back in about a week and a half.

People seem to think they have the Mariners roster figured out for the opening game (aside from a few spots in the bullpen, but I was referring to the position players).  They’ll option Alex Liddi and have Casper Wells and Carlos Peguero split time in left field.  I admit, this is the most likely but I’m not sure it’s the right decision.

If you’ve followed Spring Training, you know that Chone Figgins will be getting regular playing time for the first few weeks at least.  Little Figgy has been playing all over the diamond this spring and has spent a good amount of time in the outfield.  I’d even say he’s been there the majority of the time.  Knowing that and knowing that Carlos Peguero is bad (really bad).  Why not have Figgins be your starting left fielder for the next 2 weeks?  Keep Alex Liddi on the team and have him be the best right-handed bat off the bench.  Let him start a few games against left-handed pitchers while Seager gets a rest.  Kyle Seager should be this teams starting 3rd baseman anyway, so why not let him.

This works out for the Mariners front office, as well.  If Seager hits and Figgy doesn’t then you have a perfect excuse to cut him by the time Carp comes back.  Not a long enough trial, you say?  He’s had 2 years.  2 awful years.  Figgins is still on this team.

You can’t convince me that Figgins and Peguero on the field at the same time is a better combination than Figgins and Seager.  Figgins will be better defensively in left field.  Seager is a better hitter than Peguero.

Again, I don’t think this will actually happen because it’s unorthodox and usually baseball stays away from unorthodox but I think it should happen.  Plus, Alex Liddi is Italian.

Speaking of the Italian, he’s had a great spring.  Not that spring means much (or anything at all) but he would become the best right-hander on the bench.  He could play first, when Montero catches and Smoak DH’s.  All in all, I just think he’s better than Peguero because well… If you really want me to explain that then you need to figure out how bad Peguero is.

Last year, Seattle Sports Insider argued that Luis Rodriguez should make the team as the 25th man because he was simply better than Josh Wilson.  You can argue how much a 25th man means to an organization (probably not much), but a team should still put their best players on the major league team (unless they’re holding them back to save an extra year of team control.  We see you Paxton, Hultzen and Catricala!).  You know who the best right-handed hitter on the bench is when Casper Wells plays center, if Peguero makes the team?  There is no right-handed hitter on the bench in that situation.

I’ll break this down mathematically after the jump. END_OF_DOCUMENT_TOKEN_TO_BE_REPLACED

This has been a weird offseason for Your Seattle Mariners, but it’s surprisingly almost over.  Pitchers and catchers report to Arizona in a few weeks, with the season just over two months away.  Actually, since the Mariners open the season in Japan, their season starts a couple of weeks early.  Yes, the season opener will be at like 3:00 in the morning on the other side of the International Date Line.  Plan your lives accordingly.

Anyway, if you haven’t been paying attention or haven’t stopped to think about what the team looks like, I’ll try to help you out with a little fake Q & A.  I’m making up the questions and I probably won’t have any answers, so don’t expect too much, but this will still be a pretty good time.

Well, Jesus Montero’s the big one.  More on him in a minute.  Then there’s John Jaso, the mediocre young catcher acquired from Tampa Bay, who could actually be a pretty big upgrade.  Not a lot after that.  There are a bunch of relievers who may or may not make the team.  More importantly, the Japanese pipeline is back open, with Hisashi Iwakuma likely to join the rotation and Ichiro’s workout buddy Munenori Kawasaki vying for a backup infield spot.  Iwakuma could be pretty good.  Kawasaki is good with the glove but unlikely to hit, so that’s nothing new.  They just signed Kevin Millwood for rotation depth as well. END_OF_DOCUMENT_TOKEN_TO_BE_REPLACED

Mariners 2011- What Still Has My Interest

I can’t imagine there are that many people still watching the Mariners on a regular basis.  I’ll turn them on once in a while, but I haven’t watched a full game in weeks.  Still, they’re an interesting team at the moment, just not a terribly watchable one.  I have a few posts in mind I’m hoping to get to before the season ends.  This offseason could be fascinating, so I’m going to try to work through the roster before we get to that point.

First up: what would I be watching for if I were still watching games regularly.  I’ll try to keep these short and simple, because they’re not terribly surprising and if we’re being honest, not that exciting either.

There are some other things going on, like Ichiro and the young relievers, but this is my list.  What are you watching (or not watching) for?

Next up: a breakdown of where each position stands going into the offseason.

To top off the Huskies great win last night and the most enjoyable half of basketball I’ve seen all year, my favorite little Mariner is making news.  Alex Liddi is not little in any way, to be clear, but that’s what I’m going to call Mariner minor leaguers.  He hit a grand slam yesterday for his second in two days, which ultimately means little, but it did give us this excellent headline in the Times today:

Hard to not be happy with that.  Here’s the article.

Because of the Seattle snow, I had a whole day off today.  Unfortunately, there is still nothing whatsoever to write about in the Mariners spring training camp.  Luckily, Geoff Baker over at the Times has a feature up today about my favorite non-big leaguer, Mr. Alex Liddi.  Baker’s story provides a little insight into how a kid from the coast of Italy ends up as the top third base prospect for the Seattle Mariners.  I’m not generally a big fan of these profiles, but this one was good.  Go read it.

My love for Alex Liddi is based almost entirely on the fact that he’s Italian.  I should also say now that, like most minor leaguers, I’ve never seen him play, outside of a few video clips.  With that disclaimer, he’s a decent prospect, considered by most to be among the Mariners top 20 prospects, top 10 by some.  He’s 6’4″, 220 lbs with solid power.  He exploded offensively two years ago while playing at high-A, putting up some of the best numbers in all of the minor leagues.  Unfortunately, his home park, and the whole league to some degree, is probably the best place to hit in all of baseball, so everyone was waiting to see how he’d perform at AA in 2010.  His numbers took a hit, but he still gave a solid performance, far from the disaster some predicted.  END_OF_DOCUMENT_TOKEN_TO_BE_REPLACED