A layman’s preview of The World Cup 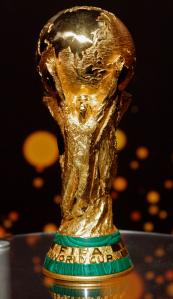 I freely admit I am not an expert at soccer. I don’t play now, didn’t play when I was a kid. I am a basketball, football, baseball guy. That said I have grown to like and appreciate soccer over the past few years, and for as long as I can remember have always enjoyed watching the World Cup. The 1994 WC in the United States had a profound impact on me as a fan: I was hooked.

So with the latest WC tourney just a week away I thought I would put together a preview. I know many readers of this blog know way more than I when it comes to futbol, so please chime in if I am out to lunch on some of my predictions.

One thing to note: There have been some pretty significant injuries lately, namely: Didier Drogba of Ivory Coast, England captain Rio Ferdinand, 2006 Final Man of the Match Andrea Pirlo of Italy and German captain Michael Ballack. These injuries do change the landscape some, especially Drogba. But overall I will try and predict based on the teams as a whole and not just one player being gone. As well, I am only looking at who will come out of the various groups.

GROUP A: Host country South Africa probably isn’t too pleased to be seeded with perennial WC entrants Mexico, France and Uruguay. South Africa will have an entire nation behind them to advance to the knock out stage. The problem is Mexico and France will advance. Even though both sides are weak coming into the Cup, I just don’t see them floundering. 1st: (LES BLEUS) FRANCE 2nd: (EL TRI) MEXICO

GROUP B: To me this group is clear cut. Argentina is a odds on favorite for good reason. Messi and Milito are flat out masterful. Milito’s performance in the Champions League Final was one for the ages. I am simply in love with Argentina. The problem lies with their head coach, the (in)famous Diego Maradona who continues to tinker with his lineup. The Nigeria Super Eagles will challenge for this groups title, but ultimately finish second. South Korea and “The Pirate Ship” Greece just don’t have the talent to hang. 1st: (ALBICELESTE) ARGENTINA 2nd: (SUPER EAGLES) NIGERIA

GROUP C: All eyes will be on this group, and for good reason, anything could happen. USA v England will get all the hype this Saturday, but I like the “other” two sides here, Algeria and Slovenia. Algeria is unpredictable, but talented, and able to score in bunches. Plus they are technically on home soil. Slovenia beat Russia to qualify for the Cup, and have an all world keeper in Samir Zmajceki. Because of these factors, these sides will give England and USA problems. Expect great matches here. Ultimately talent wins out though. 1st: (THE THREE LIONS) ENGLAND 2nd: (THE YANKS) UNITED STATES

GROUP D: A quasi “Group of Death”, this group is packed to the gills with solid sides. Without question, Germany is the favorite here. Even with skipper Michael Ballack on the shelf, the Germans are tremendously talented. Klose and Schweinsteiger are all world. As much as I like The Black Stars of Ghana, I don’t see them coming from this group. “Beli Orlovi” aka Serbia could shock here. I think this group comes down to the Aussies and Serbs, with Australia coming out ahead. 1st: (DIE MANNSCHAFT) GERMANY 2nd: (THE SOCCEROOS) AUSTRALIA

GROUP E: This is probably the clearest group to predict. I think The Dutch are the clear favorites here, I have them in my final. They are creative, tested and united. After them, I love Cameroon. They play with flair and aggression, plus being on home soil will help here. Japan and Denmark are outclassed, will ultimately not advance. This one is a no-brainer. 1st: (ORANJE) NETHERLANDS 2nd: (THE INDOMITABLE LIONS) CAMEROON

GROUP F: This is an odd group. Defending champs Italy lead, but are aging. Paraguay seems to be in the Cup each time, but have yet to make a splash. Slovakia is a mystery, with some talent, and New Zealand is clearly the worst team in the field (is their rugby team playing???)! I feel like my selections here are somewhat of a cop out. I want to go with an upset, but the group is so weak I just have to take the Italians based solely on reputation. Paraguay make finally make noise in the knock out stage. 1st: (AZZURRI) ITALY 2nd: (LA ALBIRROJA) PARAGUAY

GROUP G: Ok, here is the REAL “Group of Death”. Legit mega sides Brazil and Portugal, along with Ivory Coast make up a murderers row of telent and execution. Poor North Korea doesn’t stand a chance. Some of the worlds biggest stars reside in this group: Ronaldo, Ronaldinho, Pato, Diego, Gervinho, Drogba. Amazing talent pool. Clearly the Brazillians are the favorites here, a ridiculous amount of talent, these guys are a pure joy to watch. Between Portugal and Ivory Coast, I like The Elephants here. Even with Drogba injury (he may play with a broken arm), Ivory Coast is much more balanced than Portugal, who essentially are a one man army. I think most will take Portugal here just because of Ronaldo, but futbol is a team sport, Ivory Coast advances (plus, again, the “home soil” element plays in here…). 1st (SELECAO) BRAZIL 2nd: (THE ELEPHANTS) IVORY COAST

GROUP H: Set your DVRs to record EVERY game in this group. I am predicting high scoring, entertaining matches to permeate. Spain is the world’s #1 with Xavi and Villa leading the way. Chile is super aggressive and Honduras loves to run and gun, at the expense of defense. The Swiss made a nice run in 2006 with strong defense. The Swiss could shock here simply because of their defensive mindset. I just don’t think they have the offense to compete. Of course Spain comes out of this group, and I really like Chile to advance and possibley cause major problems in the knock out stage. 1st: (LA FURA ROJA) SPAIN 2nd: (LA ROJA) CHILE

Here is how I see the knock out stage, Round of 16 shaping up. I will predict based on the brackets groupings. Group winners play second-place teams from opposing group.

1A/2B 1C/2D GROUP: I really think England gets a great draw here. Clearly the most talented side in this bracket. Nigeria over France and England over Australia. England over Nigeria to advance to Semi Finals.

1E/2F 1G/2H GROUP: Brazil will come out of this bracket, but a quarterfinals rumble with The Dutch is must see TV. Netherlands over Paraguay and Brazil over Chile. Brazil over Orange to advance to Semi Finals.

1D/2C 1B/2A: I like Argentina to come out of this group over a talented German side. Too much offense in Argentina. Germany over United States and Argentina over Mexico. Argentina over Germany to Advance to Semi Finals.

1F/2E 1H/2G: Here Spain will finally advance and live up to expectations, but not before Ivory Coast and Cameroon press them to the limit. Cameroon over Italy and Spain over Ivory Coast. Spain over Cameroon to advance to Semi Finals.

SEMI FINALS: The amazing pool of talent in the Final Four will be a spectacle. England and Brazil on one side, Argentina and Spain on the other. If you are a sports fan with a pulse, you will watch these matches. As much as I want to see England advance, Brazil is too much. The hype will be amazing, but Brazil will dominate England (who will advance to the Semi’s more on the ease of draw rather than brute strength). Argentina v Spain is a battle-royale. So much talent, passion, I am simply going with my gut here and taking Messi/Milito and the Argentines. Spain is great, and very well could advance to win the whole thing. Again, gut reaction here.

FINAL: BRAZIL V. ARGENTINA: An all South American final will pit the two most talented sides against each other in a spectacle of soccer talent. Somehow I like Argentina here only because I am simply in love with Messi/Milito. The Brazilian talent is unmatched, and they are cool under pressure, but Argentina has the two best players who have a flair for the dramatic, plus Maradona is there to lend a helping hand if necessary (hey oh!). Argentina over Brazil in an epic final.

2 responses to “A layman’s preview of The World Cup”