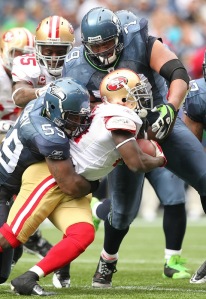 Coming into the Seahawks game today, I honestly had no idea what to expect. I have been supportive of the new direction Pete Carroll and John Schneider are taking the Hawks in. I really feel I have no choice. When a team wins 9 games in two years, and look really bad doing it, blowing up and starting over is a good course of action. Because of this, expectations are hard to gauge.

The 49ers have been the chic pick to win the division all off season. They have a stout defense, some nice skill position players, a solid offensive line, Frank Gore and, uh, oh yeah, Alex Smith. Somehow the fact that Alex Smith has done absolutely nothing in his pro career was lost all the experts. Maybe because the rest of the division is so bad, people figured he was the lesser of all QB evils. I have never been a believer in Smith, and have been vocal that the 49ers will go as far as Smith takes them, no matter how good their defense is. Today was a perfect example of this fact, even though the Niner defense wasn’t great either.

The shocking 31-6 waxing the Hawks put on SF was a joyful surprise. I thought all along the Hawks had a shot to win, simply by virtue of the home field advantage and first game adrenaline, but I never thought they would completely dominate in all areas of the game.

Defensively, the Hawks shined. Early in the game while the offense was still feeling out the Niners defense, the Seattle defense spent a lot of time on the field. Bending, bending, but not ultimately breaking. Three times SF was in the red zone, only coming away with 6 points. They held Frank Gore to only 38 yards on 17 carries, and forced Alex Smith into an interception. Because the defense was able to hold the 49ers down, they gained confidence and became extremely aggressive as the game wore on. Right off the bat in the 3rd quarter, Marcus Trufant picked off Smith for a TD, which in many ways was the finals straw for SF, they had no fight after that. The Seahawks sent blitzes from every conceivable angle. Chris Clemons and Red Bryant were in Smith’s face all day long, and the secondary did a great job covering and hiding looks. Mid way through the 3rd quarter, I had the distinct feeling the game was on ice, Smith had zero confidence in his line, Gore was constantly getting stuffed, the WRs were unable to get YAC and the 12th Man was bringing serious noise. The defense was my MVP for the game. They played with their hair on fire, all the while playing with discipline and control. That is a scary combo for opposing offenses.

Offensively, the Hawks warmed up as the minutes ticked by. The first play of the game, Matt Hasselbeck threw as bad an INT as you could throw. But, like the good veteran he is, Matt bounced back and made play after play, hitting Mike Williams, Butler, Carlson, Branch for various gains. The running game was efficient, not great by any means, but able to get small gains. Overall the offense was efficient, not making mistakes, gaining first downs, and exposing mismatches in the secondary. I would like to see the running game get better, but seeing Matt Hasselbeck look like his old self was so great to see. A healthy and aggressive Hasselbeck will spell success for the Hawks.

Having Lofa Tatupu, Matt Hasselbeck and Marcus Trufant healthy and fast makes this team a team that can indeed win the NFC West. That is not the kool aid talking either. Considering how bad the 49ers looked today, and how pathetic the Rams and Cards looked as well, the Hawks are sitting pretty after one week. Injuries are the key, they must stay healthy. Denver will be a very difficult game, Mile High is a brutal place to play for road teams. Can Seattle go in and win? If they play defense like they did today, they can be in any game in any venue.

Game 1 of the Pete Carroll era is a smashing success. I hope Seahawks fans (myself included) will enjoy this. Just take it all in and enjoy the week. Please don’t be the boo hoo naysayers you have been all off season. Put on your Hawks colors and get ready for Denver. Talk some smack, have fun, dream big. This is Seattle, bad things are always around the corner, so let’s get on the bandwagon now and have a blast!