Getting To Know Your Dawgs – Wide Receiver

Camp is almost half over and the first game is 2 weeks away.  It seems as if training camp has brought a new injury with it everyday.  When you list everything out (which I will do after I run through the wide receivers) it doesn’t look as bad as what the perception is.

I’ve written about quarterbacks, running backs, and fullbacks so far in this series and I move on to receiver today.  The position is going through what seems to be a little bit of a face lift this year, with Jermaine Kearse and Devin Aguilar graduating.  Those two had very good careers at U-Dub, although they both came with their fair share of frustrations.  Most fans agree that, while the 2012 group is young, they have a good amount of talent and shouldn’t see a huge drop off in production.  On to the names!  I’ll include most players (I will probably leave off some walk-ons who I don’t see as contributors this year).  The order I list them is in the order I perceive as the current depth chart.

I was just reading Ted Miller’s blog (which is fantastic) and he was asked to compare Kasen Williams and Marquess Wilson.  He said that it wasn’t a fair comparison in comparing someone who is an All-American and someone who is mostly based on potential at this point.  This is exactly right.  Kasen Williams has as much potential as any receiver in the Pac-12 and maybe the country.  No, really he does.  He flashed it at times last year but he has hardly proven himself.  He’s not in the Pac-12 elite but I would be surprised if he wasn’t in that group by the end of the season.  Every Husky fan (and a few WSU fans) have the picture of Kasen leaping over a defensive back in the Apple Cup cemented into their memory bank and these are the type of plays that we hope to see all year.  Last year, Kasen caught 36 passes for 427 yards.  I expect him to double those yards.  By all accounts, Williams should be a star at some point, the question is if that will happen this year.  I sure hope so. 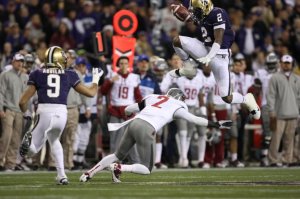 James Johnson has had an interesting career as a Husky.  He scored the first touchdown of the Sark era, as a true freshman.  Johnson then went on to have a great freshman year (39 catches for 422 yards), particularly in the first half.  He was then injured before his sophomore year and somehow got lost in the mix at the position.  He never really saw the field, aside from a few plays here and there.  Last year brought something of a comeback for Johnson (28 receptions for 366 yards).  He would have a few great games (Nebraska comes to mind) and then disappear for a game it seemed.  He did miss a few games due to injury.  This year is off to an ominous start, as he’s suffered a dislocated wrist and a few torn ligaments.  Sarkisian said that he’ll be out 4-6 weeks.  This is a blow to the Dawgs for the first few games as most people had James penciled in as the number 2 receiver.

Speaking of interesting careers, I’m not sure any player could top Bruns in that category.  Cody Bruns played in his first game half way through his freshman year because Ty wanted to run some trick plays.  Cody would get on the field for about 3 plays a game and it wasn’t usually to catch passes.  Bruns was a bit lost in the depth his sophomore year and then played a little more his junior year.  He’s been labeled as a player who could do everything from holding on field goals, to passing the ball, to punt coverage, to actually receiving.  Last year, he was dealt an emotional blow as his father passed away.  The coaches and Bruns decided that a redshirt year would be best for all involved.  Now Bruns enters his last year and figures to be an integral part in the receiving corps.  He may be used in a more conventional way than usual but don’t be surprised to see him be on the field in many different capacities.  He has surprising speed and is said to be a sharp route runner.

It’s easy to forget that Kevin Smith didn’t play all 4 years of high school football.  He started later but his athletic ability made up for however raw he was.  Now he’s an upper class-man who could be a pretty big contributor (208 yards receiving last year).  Smith is still recovering from an ACL injury and could be limited for the first month of the season.  If he does come back to 100% healthy, there’s no doubt in my mind that he’s one of the Huskies 4 best receivers.  You may also see him back returning kicks and showing off his speed.

Mickens was rated as a four-star recruit coming out of California and has been turning heads in the first 2 weeks of camp.  He has even been running with the starters in the last couple of days due to injuries ahead of him and his good play.  Mickens is the smallest of the receivers (5-10, 170) but has a ton of speed.  He’s almost assured to play this year and I wouldn’t be surprised to see him start in 2 weeks.

Much of what I said about Mickens rings true for Taylor.  He was a highly rated recruit coming out of Arizona who has been making plenty of plays thus far in camp.  He’s also 5-10 but a little bulkier than Mickens.  His high school mascot was a Husky so that’s cool, I guess.  Taylor will see plenty of playing time, especially as Johnson and Smith work their way back as the season progresses.  Sure, these 2 freshmen probably have their best days a few years down the road but we don’t have the luxury to wait for that since the Dawgs need them now.  I’m guessing they’ll come through with only a few hiccups along the way.

A few more guys and notes after the jump. DiAndre Campbell (RS SO.)

Whenever I type out DiAndre I always put DiAndrew first because I’m used to adding a W to Andre.  I bet DiAndre doesn’t have that problem.  Campbell played sparingly last year.  He did play in all 13 games but most of that time was on special teams.  He seems to be a little ways down the depth chart right now and I don’t hear much about him during the practice reports.  Campbell is still young and could turn into a steady contributor but I don’t see him becoming a big impact guy this year.

Sims enrolled last spring an has already gone through 2 position changes.  Many thought Antavius would play cornerback for the Dawgs but he played running back for most of the spring and has since been moved to receiver.  I wouldn’t be surprised if he was moved again.  Antavius rivals Psalm Wooching in coolest name on the team.  He is a great athlete who played quarterback in junior college.  He is one of the fastest guys on the team and will probably see the field in some manner or another, but I don’t expect him to be a convential receiver very often.

Hall also enrolled in time for spring ball and is a speedster.  He’s another 5’10 guy (all of the true freshmen are, which is a little bit weird) who could be use more in the slot.  Of all of the freshmen, I think Hall is the most likely of the group to redshirt.  He seems to be running with the 2nd or 3rd string team and hasn’t been mentioned much in the reports I’ve read.  If he does play, expect to see him returning kicks at some point.

Jamaal Jones seems to be kind of a forgotten man right now.  The reason for that is he hasn’t played in a competitve football game in 2 years.  Jones was injure his senior year of high school and then redshirted last season.  He is coming off an injury but is getting close to being able to practice.  I don’t know what to expect from Jones since I’ve never seen him play, or even practice, but he was a solid recruit who could add needed depth if he gets healthy

That’s about all of the receivers.  It’s a talented but raw group who could turn into a strength of the team.  Having Keith Price around doesn’t hurt things at all.

Below is a list of the current injuries in camp.  I hope that I covered all of the injuries but it’s possible that I missed a few.  The amount of time they’ll be out is my best approximation.

Yes, there are a lot of guys on that list but there are only 3-5 who will miss the first game.  Many of these guys are just working their way back from injury slowly, as well.  Sure, you wish that everyone was healthy but that’s not realistic and just doesn’t happen in training camp.  The best news is that nothing too significant has happened to either line (knock on wood).  That is a place where reps are important to the starters.

That’s all for now, thanks for reading!

One response to “Getting To Know Your Dawgs – Wide Receiver”