To be quite honest, creating a “Preseason All AL West Team” is a futile exercise.  If you are looking for an MLB season preview, full of sound analysis and predictions, this isn’t it.  But I’m a visual learner, and there is some value in seeing where the power is in the division, position by position.  Of course this isn’t an exact science, no predictions are, and only 2 players are selected per position, so you have a guy like Kyle Seager, the M’s second best position player, not making this list thanks to Beltre and Donaldson.   So ya, take this for what it is.  A quick snapshot of the division headed into 2014.  Although I should point out, by forecasting who has the most 1st and 2nd teamers, I correctly guessed the order of finish in the division last year!

My selection process looks at last year’s performance as well as projections for the upcoming season, and anticipated playing time. Some of the picks are obvious and others are less obvious, so of course I’d love to hear your thoughts too.

Taking the visualization one step further, here’s a super scientific bar graph intended to show the separation between teams, by awarding 2 points for a 1st team selection, and 1 point for a 2nd team selection.

Unlike some college sports, pro sports don’t come out with pre-season 1st and 2nd teams, but if the AL West had its pre-season team, this is how I think it would shake out. Clearly this is not a perfect method to predicting the AL West in 2013, and by season’s end the 1st and 2nd team selections will look different. But, it does provide a snapshot of how the division stacks up. My selection process looks at last year’s performance as well as potential this upcoming year, and projected impact/playing time. Some of the picks are obvious and others are less obvious, so of course I’d love to hear your thoughts too. 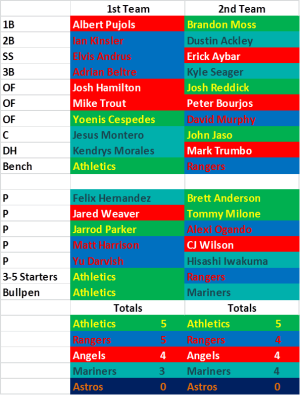 Unlike NCAA sports, pro sports don’t come out with pre-season 1st and 2nd teams, but if the AL West had its pre-season team, this is how I think it would shake out. My selection process looks at last year’s performance as well as potential this upcoming year, and often I use the sabermetric WAR to break ties. Some of the picks are obvious (Pujols), and others are less obvious (DH), so of course I’d love to hear your thoughts too.

A quick analysis shows that Texas is the class of the division, with more 1st team selections than the rest of the west combined. Anaheim has good 2nd tier depth, solid pitching, and balance. Texas and Anaheim each have 8 1st or 2nd team selections of the possible 10 positional categories, and of the 14 pitching spots, a whopping 11 are Rangers (6) and Angels (5). The M’s are a distant 3rd, but a ways ahead of the re-building A’s, who are loaded with average players but no star power whatsoever.

I wanted to take this chart one step further, and visually quantify the separation between teams based on these picks. To do so, I’ve simply awarded 2 points for a 1st team selection, and 1 point for a 2nd team selection. Here’s how it shakes out on a bar graph.

Lastly, here are team by team offseason wrap ups, after the jump… END_OF_DOCUMENT_TOKEN_TO_BE_REPLACED

Last week, Dan put up a post with his pre-season all-AL West team.  Matthew, in the comments, alluded to the lack of star power in the division.  When you look at the list Dan has assembled (which I think is pretty accurate, especially the first team) the amount of stars on the team are a bit underwhelming.

With that in mind, I thought I’d compare Dan’s list to the best players in the AL East (which is the strongest division in my opinion).  These are all my opinions and I’ve based them on prior season stats, sabermetrics, and potential.  I choose to just assemble a first team for both divisions because the topic is star power, not depth.

Overview: I’m pretty high on Morales, I think he is vastly underrated, but Adrian Gonzalez is one of the top players in the game.  Gonzalez edges out Teixeira for the 1st baseman in his division.  Teixeira would be a first teamer in the AL West.

Overview: This one’s a fairly obvious choice also.  Kinsler is a good player, and is an all-star when completely healthy, but Cano is the best 2nd baseman in the league (edging out Utley).  Cano posted a 6.4 WAR in 2010 (he hit .319 with 29 homers while playing decent defense).  Kinsler can post similar offensive numbers when healthy but he’s only played over 130 games once in his career.  Cano has played 159 or more the last 4 seasons.  Maybe in a couple years we’ll be seeing how Ackley stacks up against Cano.  Here’s to hoping.  A healthy Pedroia enters into this conversation, also.

Overview: I might take some heat for putting Escobar over Jeter but I put him there because Jeter is one of the worst defensive short-stops in the league, while Escobar is pretty sharp.  The AL East is pretty weak at short-stop and Andrus wins this one easily, based on potential alone.  Both Escobar and Jeter put up WAR’s in the 2’s last year and Andrus put up a WAR of 1.5.  But, if I had to choose one of those 3 players to be on my team this year, I’d take Andrus without question.  His bat will continue to get better, while his defense is superb (unless he has a Yuniesky-type flop).  J.J. Hardy could also sneak into the picture for the East.

Overview: The East shows their dominance in this position.  They have Longoria (a top-5 player in the league), A-Rod (a future hall-of-famer, who’s put up at least 30 HR’s and 100 RBI’s each of the last 7 seasons), and Kevin Youkilis (who’s more annoying than A-Rod, but just as effective) who each have a strong case to be picked over Beltre.  I love Adrian, he’s one of my favorite players in baseball, but Longoria wins this one easily.

The rest of the positions after the jump.  END_OF_DOCUMENT_TOKEN_TO_BE_REPLACED