Looking At The Dawgs – Offense

In past years, I’ve tried to do position previews before Husky football season kicked off.  Usually these previews fizzled out somewhere between the linebackers and the secondary.  In an attempt to end this, I have simplified the previews this year.  I will be previewing the offense in one post and the defense in the next.  I will do a general overview of each side of the ball first and then break down the position groups (although I’m not going to make those all that in-depth).  I don’t plan on listing all 90-plus guys on the roster over these but I will try to give an idea of what I think about the starters and the depth at each position.  With these things in mind, let’s get started with the offense! 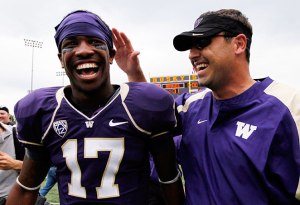 Heading in to 2012, the Husky offense was thought to be a strong point of the team.  They had lost their top receivers and one of the great Husky running backs of all time but they had a stud tight-end, a few exciting prospects at running back, a returning offensive line, a decent receiving group, and a Heisman contender at quarterback.  Things didn’t exactly go to plan.

Before the season began, the Huskies were already down a few offensive linemen.  That continued throughout the season and caused the offense to fall apart.  The tight-end was great.  A star was found at running back.  But, the offensive line couldn’t pass block, a second, third and fourth receiving option was never found, and Keith Price went from a Heisman dark horse to a guy that some people wanted benched.  The offense was a disappointment, but it was one that people could make excuses for.

In the spring, the Huskies started to implement a no-huddle offense.  This has continued and will be used this season.  Apparently, the playbook is close to the same.  While they may have simplified it some, Sark has not moved to a spread offense.  I will talk about how this affects the defense in the next post but it has yet to be seen how it will affect the offense.  If the playbook really hasn’t changed much, I think the offense has a chance to special.  Sark has always been good at taking advantage of match-ups on the offensive side and as long as this is the focus of the offense and not just ‘going fast’ I feel confident in what the team can do.  The offensive line returns almost everyone and the depth of the whole offense could make running the no-huddle effective.

Quarterback:
Starter – Keith Price (RSr.)
Keith Price was extremely efficient and productive in his first year as a starter in 2011.  Last year, he was a shadow of himself.  Price couldn’t move around very well, was constantly pressured, and made questionable decisions.  His efficiency in the red-zone, which was what made him great in 2011, slipped dramatically.  Price seemed to want to be too perfect at times and played scared at other times.  I’m hopeful that playing in the no-huddle offense will limit his thinking and get him back to just playing ‘Keith Price’ football.  He is only a few touchdown passes short of breaking the UW career record.  He’s had an amazing career, regardless of the last two games of 2012.  Here’s hoping he gets back to his improvising, accurate ways.  I’m glad he’s our quarterback.
The Depth – Cyler Miles (RFr.), Jeff Lindquist (RFr.), Troy Williams (Fr.)
It seems like what is listed above is the pecking order.  Miles has separated himself as the backup.  He is a good athlete and a play-maker.  His weakness seems to be his arm strength.  Lindquist came in with Miles and, while he may have fallen behind him now, appears to be in the running for the starting job next year.  Jeff is from Mercer Island and has a stronger arm but maybe not the big play ability of Miles.  Williams is a true freshman and was highly recruited around the country.  He is mobile and said to throw the best ball out of all of the quarterbacks (maybe not the most accurate, but the strongest and best spiral).  Expect Williams to redshirt unless everything falls apart.  Unlike last year, the quarterback depth appears to be in solid shape and they seem to be capable backups.   END_OF_DOCUMENT_TOKEN_TO_BE_REPLACED