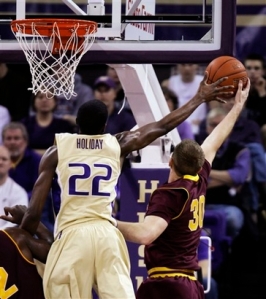 Wow, well, finished up watching the Dawgs wipe the floor with ASU. That’s great, I really don’t like Derek Glasser, he’s a bum. Thursday at Cal. CAN WE GET A ROAD WIN PLEASE!?!? National TV, ESPN, let’s do this DAWGS!!! UW wins and first place is ours.

Anyway, I was invited to be a member by Danny and so far the posts have been excellent, I expected nothing less. I am clearly NOT the best good guy here, I can tell right away I might just be the peanut gallery!! I am honored to be a part of this, as I am passionate sports. It’s a wonderful constant in my life, always a great topic of discussion and interest. I think humor and lightheartedness are vital to loving sports (especially in this town!!!!), so fair warning, I may not always be serious…

About me… I’m 32, born and raised in the state of Washington, so yes, I am a homer, but I love the national sports scene as well. Went to school at Auburn High, then college at the UW, class of 2000. The Huskies are it for me, football and hoops are 1 and 2 on my list. I am very passionate about the UW, I love the school, the campus, the neighborhood. I love the vibe before and after games. I really don’t pull for any other school, and I am generally not a “root for the Pac-10” guy. I backed Penn State in the 1994 Rose Bowl against Oregon when a bunch of so called UW fans thought it was “neat” the Ducks made it. “Go west coast” they tell me. Bull. Oregon sucks and always will. Kenny Wheaton is a cuss word in my vocab.

Regarding pro sports, I love the M’s, Hawks, Sonics, Sounders, TBirds. Yes, the Sonics. I still love them and always will. The Supes are a passion of mine. The 1990’s are the decade I really matured sports wise, and the SuperSonics had their best run that decade. I am old enough to remember Dale Ellis, Tommy Chambers and the X-Man, but for me Payton and Kemp are almost sports deity. The 1996 Sonics are family. The spring of ’96 was one of the best times of my life. The fact that this city does not have an NBA team is a complete and utter disaster and joke. I shake my head every time I think about it. But, I am hopeful. No idea why, I just choose to be hopeful that one day I’ll see the Green & Gold back out there on the hardwood.

I have a ton of thoughts about the upcoming Mariners season, the upcoming NFL draft where the Hawks MUST get it right. In the NFL if you screw up the draft, it will set back the organization years.

If you’ve made it this far, congrats, I am done, sorry no prizes… I know it was a lot about me, but I thought I better get my street creds out there now before someone asks for them. More to come!!